By Ch. Lochranza Touching Wood ECM out of Ch.Lochdene Hop-Scotch 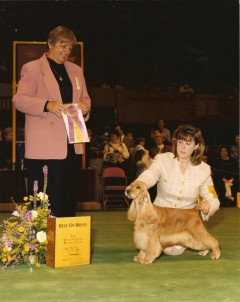 I never could have known on a cold February day in 1991 that this dog would take me so many places and give me many blessings.

Our time in the ring started out strong when at the 2nd show we entered Taffy was awarded Best of Breed from the classes over many specials for a 5pt. major!  The road to her championship was fun with a few more Best of Breed wins along the way.  This was just the begining for Taffy....

Next was motherhood.  Taffy had a total of 3 litters.  She produced only 3 champions out of those litters but those three dogs have had a profound impact on the breed.  From her first litter to Ch. Ebonwood Ashgrove Trademark she gave Liz Neff of Dragonstar ECS her foundation bitch, Ch. Canterbury's Lady In Red.  From that litter I kept Ch. Canterbury's Tailor Made.  Both Scarlett and Tailor went on to be wonderful producers.  Her last litter was to Ch. Ebonwood Gazpacho ECM.  From that litter came the first dog to carry the Majestic name, Ch. Majestic's Hail To The Victors.

12 weeks after her last litter Taffy was awarded Best of Breed at the Westminster Kennel Club dog show.  Her wonderful show carrer continued until she was 13 1/2 years old.  Taffy never gave anything less than 100% in the ring and in life.  With out a doubt she was a "once in a lifetime girl"!

3.20.17 Our puppies have all been placed in loving forever homes.  We are planning a summer litter with puppies not availble to homes until late August or early September.  Please check back with us in early August for possible availability.

On our new website we introduce you to Majestic English Cocker Spaniels.  The website is still under construction, updates to come soon.

Do you see an Englsih Cocker puppy in your future? Contact us now to see if a MAJESTIC English Cocker puppy will be the new addition to your family!