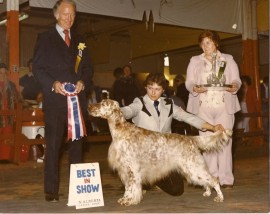 In 1973 Doug purchased a young show prospect English Setter.  Little did he know what it would lead to.  In 1974 that same dog finished his Canadian championship and was his jr. showmanship dog.  Together they won several junior competitions and in 1975 began a specials career.  In 1975 Ch. Leighton's Top Choice was #1 English Setter and #10 Sporting dog, not bad for a kid and his dog!

After graduating from a 2 year course with a Veterinary Technology certificate Doug decided to become a professional handler.  He apprenticed with two different handlers in the U.S.  Terriers and Sporting dogs became his love and after two years he returned to Canada and began handling as a profession.

Doug has campainged many top dogs including 2 that became Top Dog All Breeds including "Bently" the Wire Fox Terrier who still remains the top dog of all times in Canada.

In 2003 Doug moved to the United States to marry Kay.  He has continued his sucess as a professional handler and has built a successful business building custom wood crates.

3.20.17 Our puppies have all been placed in loving forever homes.  We are planning a summer litter with puppies not availble to homes until late August or early September.  Please check back with us in early August for possible availability.

On our new website we introduce you to Majestic English Cocker Spaniels.  The website is still under construction, updates to come soon.

Do you see an Englsih Cocker puppy in your future? Contact us now to see if a MAJESTIC English Cocker puppy will be the new addition to your family!